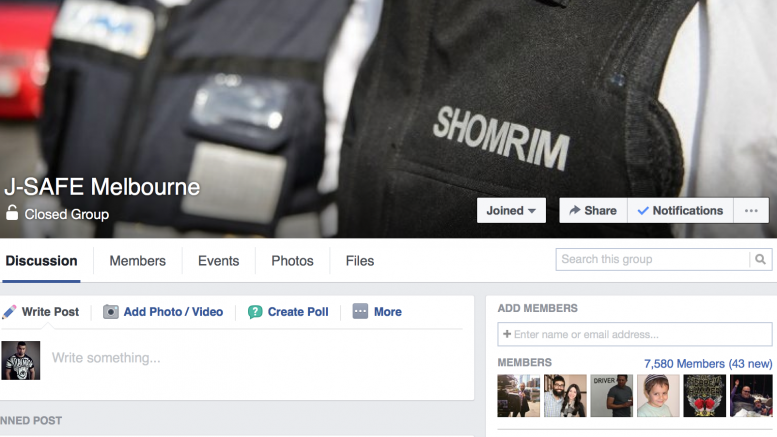 Melbourne is facing a crime epidemic. According to Crime Statistics Agency figures, criminal activity has soared by 12.4 percent in the last year in Victoria alone.

In a bid to shed more light on crime, almost four months ago, I created the Facebook group J-Safe Melbourne. It’s a place for my local community members to share any criminal behaviour they’re witnessing in real time. It’s an online space for victims to report crimes as they happen, to protect others.

J-Safe Melbourne is also a platform designed for experts to provide the public with advice and tips on how to prevent and respond correctly to different criminal threats and attacks. You could say, it’s like the modern-day Neighborhood Watch.

Over the past 6 months, police forces around the nation have been warning the general public against reporting crime on social media platforms like Facebook and Twitter. Initially after launching the J-Safe Melboune group, the police responded with a lot of encouragement.

Soon after, I was summoned to attend an important meeting with Caulfield’s police.

I’d heard it all before. Just like in their statements of late, the police sitting in the meeting tried to attack the concept of the public protecting their community by reporting crimes on social media.

It’s ironic, when the police patrolling the streets putting themselves on the front line agree that using social media as a tool to interact with the community is a “no brainer and we should be doing it”.

However, the establishment around the meeting table feel very different. But why?

The simple answer is, it gives the impression the police and the governing bodies are not in control.

But that’s too simplistic, there’s more to it.

Police have a public perception to uphold

The police aim to create a particular public perception; one that suit them. Social media platforms alerting of criminal activity simply highlights what’s happening on our streets. If crime is up a little, everyone will hear about it.

A platform like J-Safe Melbourne, is a tool that can help make us feel safer by providing us with the knowledge of certains crimes. We can then know how to protect or defend ourselves from crimes happening to us, or we can help our neighbor if it’s happening to them.

For the police, this is the exact thing that creates the perception of very high crime. Obviously not the impression they’re wanting to give.

I want to make it very clear, I would never advise people report crime online instead of connecting the police. That would be very silly indeed.

I strongly encourage everyone to report crime to law enforcement FIRST, then online for the general public to see, on any platform you have access to. It’s our obligation to connect with the community and let them know what’s going on in their own backyard.

Yes, to a certain extent this does encourage a heightened sense of “fear” within the community. But I think that’s a good thing, especially in today’s climate.

A healthy dose of fear can ensure you do what needs to be done to protect yourself, your family, and your home.

The biggest problem police are facing today, besides their lack of numbers and resources, is that instead of working with the communities who are partaking in these online groups, they’re trying to condemn their existence.

In this move, the police are essentially working against the people they’re supposed to be protecting.

In Melbourne, people are living in fear. There is a growing number of people sharing their horrific experiences on social media. The reality is, it’s going to happen whether the police like it or not.

The more crime there is, the worse the police and the government look. But spare us with the cover up, the louder the conversation is about criminal behaviour taking place in real time, the better the community is for it. That’s what really matters.

Apex: How to end their reign of terror