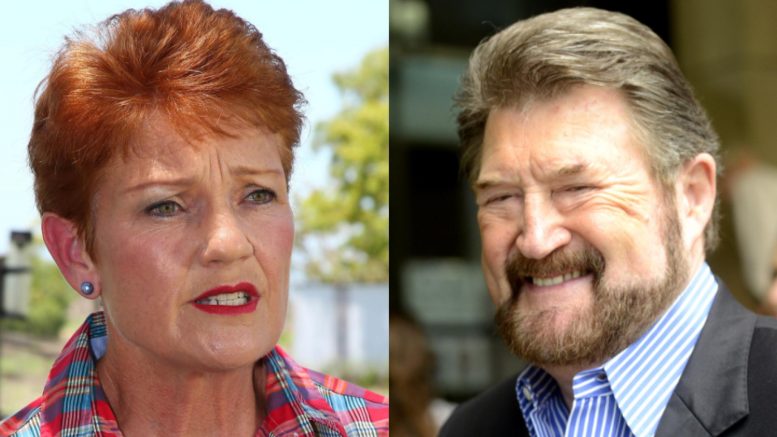 Senator Derryn Hinch and Pauline Hanson have made headlines for their desire to repeal section 18C of the Racial Discrimination Act, which aims to outlaw anything that’s “reasonably likely…to offend, insult, humiliate or intimidate another person or a group of people” because of their “race, colour or national or ethnic origin”.

They’re right to want to push for this controversial law to be abolished. I know by just writing this as a Jew, I’m going to infuriate some of my community members.

Not necessarily because I’m agreeing with Ms Hanson, an anti-immigration campaigner, but more due to my community’s misguided faith in a law that it’s supposed to “protect” us from Holocaust deniers.

Pauline Hanson is correct in saying “We are entitled to freedom of speech and freedom of expression,’’. The laws she said, are “stifling people’s right to have an opinion.”

Our society has become one of politically correct madness. It’s time we actively combat it and abolishing this law is one of the first steps in the process.

People are becoming increasingly worried that what they say will be considered racist or offensive.

The fear of insulting others has suppressed the voice of many Australians.

Haters have a right to be heard loud and clear

The reality is, many in the Jewish community want to have it both ways. They want the protection to shut down the Holocaust deniers, and they want the right to criticise others.

Unfortunately, they can’t have it both ways. It simply doesn’t work like that.

Personally, I’d rather hear what my haters have to say loud and clear. I don’t want them to suppress their feelings in fear they’ll be prosecuted.

We live in the internet age which makes enforcing laws like the 18C act extremely difficult, if not impossible. It’s simply too easy to voice your opinion online under an anonymous allise.

We also should question the need for a law to prosecute people who voice racist or discriminatory opinions. Post something insulting online and thousands of people will hit back, making social justice a lot more effective in most cases.

One such example is the recent incident at the Rio Olympics, which caused the internet to go into meltdown. Egyptian Judoka Islam El Shehaby, refused to shake the hand of his Israeli rival after their match.

The internet went wild and the Egyptian Olympic Committee was forced to “throw their athlete under the bus” by distancing themselves and condemning his actions.

The internet and social media platforms has created a forum for the public to voice their opinion as events happen. In the past, when the public had no voice, this situation would never have made headlines and the Egyptian athlete wouldn’t have been publically condemned.

We have a right to free speech

As a Jew, I want to hear the truth. I want to know exactly what they’re feeling, so I can expose who these people really are. I also want the right to debate what needs to be debated.

Free speech MUST be that and nothing less.

Whether racist or not, it’s a fact of life that you may not always like what someone has to say. Regardless of the content, you should have every right to respond. You even have a right to feel offended or insulted.

“I’m offended and insulted that I can’t say anything that will offend or insult,” Mr Hinch said. And he is totally right. Nobody should be denied the right of freedom of speech. Nobody should be shut up legally for voicing their opinion.