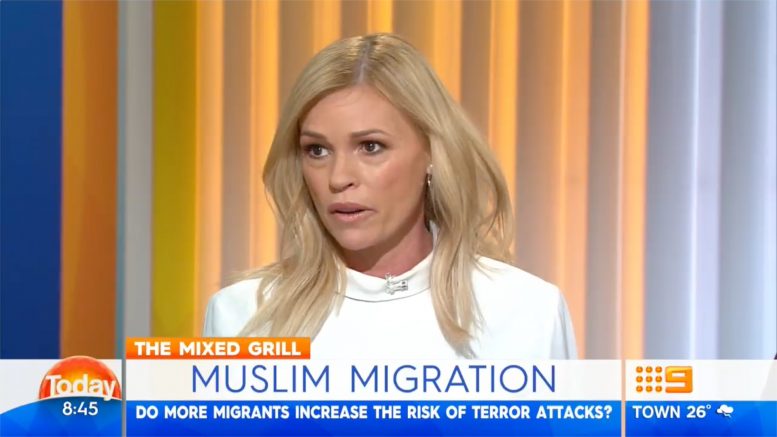 On Monday Sonia Kruger shocked Channel 9’s Today Show viewers with her direct stance on shutting Muslim immigration to Australia. After voicing her position the internet and mainstream media spun out of control.

We’ve become accustomed to seeing the regular “right wing” commentators say these kind of things. People don’t blink when Andrew Bolt, Rina Pihati and others like them make these bold statements. But when Sonia, who, in the eyes of many people, represents the average Australian, also aligned with these strong views, the country reeled.

The progressives are intent on showing their outrage through vile personal attacks on Sonia, all in the name of their “open-minded” cause. Sonia is a brave woman for having the courage to say what she said and the response, while not surprising, is absolutely mind boggling and utterly disgusting.

Discussing ideas like these is hard and it’s uncomfortable, but, as Sonia so rightly put it: “we must be allowed to talk about it”.

Whether you agree with Sonia’s position or not, we should all agree that we need to be able to have this conversation. No matter on what side of the argument you sit. That is what makes us a democratic and free society.

Discussing anti-Muslim immigration has become a taboo topic. Those who dare to broach it are automatically labelled racists. But there’s a growing appetite in Australia for these conservative views to be voiced. Pauline Hanson’s re-election is prime evidence. The support for Sonia Kruger is prime evidence.

As a child of an immigrant and a member of a community that was basically built off the back of Jewish immigration after the horrors of the holocaust, people often attack my stance on immigration. They say things like “how can you be against immigration when you’re a Jew and from a family of immigrants?” They insinuate that I cannot be anti-Muslim immigration when I’m only here due to immigration.

So as a Jew, the son of an immigrant, the grandson of immigrants, I agree wholeheartedly with Sonia Kruger. Why?

It is simple mathematics.

More muslim intake brings up the threat level of terror in Australia, not because all muslims are terrorists, rather because a small percentage are. Meaning, for example, if .1% are terrorists, then for every thousand you bring in, you’re also importing 1 terrorist. So bringing in 100,000 means you’ve just imported 100 terrorists.

Being anti-Muslim immigration makes you cautious and caring, not racist. We’re not saying that we need to stop immigration from everywhere. Immigration is a good thing, hell I wouldn’t be here if not for it. We’re saying: let’s choose who we take. Let’s minimise the risk.

There are so many people around the world who need a home. People who will appreciate it and contribute to our society. Let’s open the doors to those people, the ones who pose no risk of terror.

We are lucky enough to be able to learn from others mistakes, let’s not end up like France.

I’m an Australian Jew, I’m not a racist. I’m a patriot and I stand for what’s right. I pray that all sensible Australians join this conversation instead of attacking those who are willing to have it.